Israelis are awaiting the delivery of the first batch of Pfizer coronavirus vaccines, which are expected to arrive in the Jewish State before the end of this week.

The vaccine, expected to arrive Thursday, was originally going to arrive “by the end of December.” Health Ministry Director-General Professor Chezy Levy, told representatives of health insurance providers that the beginning of vaccine distribution is set for December 20.

However, an announcement Tuesday by the US Food and Drug Administration that revealed two participants died after receiving the vaccine during Pfizer’s clinical trials has raised the eyebrows of Israelis who worry about whether or not to raise their sleeves for the shot.

The information was released Tuesday in documents that were released ahead of a meeting scheduled for Thursday with outside experts who are set to discuss whether the vaccine should receive emergency authorization. It is not clear whether media remembered to mention that four others also died during the trials — and they were in the control group at the time — so they were people who did not even receive the vaccine.

One of the two people who died was an individual who was already immunocompromised before the vaccine was administered.

The scientific director of Israel’s Midaat Association notes that in large clinical trials involving tens of thousands of participants, deaths may occur with no connection to the trial, the Jerusalem Post reported.

Companies like Pfizer, said Dr. Uri Lerner, are required to report those deaths.

“According to the published data, six of the participants in the experiment died – two of whom received the vaccine, and four from the control group (which did not receive the vaccine.) After an in-depth examination no connection was found between the experiment and the cause of death.”

The website of Midaat is a member of the World Health Organization-led project Vaccine Safety Net (VSN). Midaat’s website is the most comprehensive portal on vaccines in Hebrew, said the WHO. The site contains detailed information regarding all the vaccines included in the vaccination routine in Israel for babies, children and youth, adults and travelers. This includes specific vaccination schedules.

For each vaccine, the site describes the diseases from which it protects, expected side effects, the different compositions, and more. The site caters to diverse target audiences, ranging from parents and the general public to health and education professionals.

The FDA said Tuesday in its report that the data included in the application for emergency authorization provided adequate support for the request.

FDA staff said Tuesday that data on Pfizer’s coronavirus vaccine were in line with its guidance on emergency use authorization, raising hopes it could soon be made available to Americans aged 16 and above, Reuters reported.

The comments were made in documents released ahead of Thursday’s meeting of outside experts to discuss whether the shot developed with German partner BioNTech SE should be authorized for emergency use.

The FDA is expected to decide on whether to authorize the vaccine within days or weeks. Nevertheless, the agency said at present there is not yet enough research to guarantee the safety of the vaccine for pregnant women, children and those who are immunocompromised.

Six people died in Pfizer’s late-stage trial of the COVID-19 vaccine, the US Food and Drug Administration has revealed just hours after Britain became the first country in the world to roll out the vaccine.

UK grandma receives first public Pfizer vaccine Margaret Keenan, a 90-year-old grandmother from Britain, has become the first person in the world to receive the Pfizer COVID-19 vaccine outside of a trial following its rapid clinical approval.

Six people died in Pfizer’s late-stage trial of the COVID-19 vaccine, the US Food and Drug Administration has revealed just hours after Britain became the first country in the world to roll out the vaccine.

But the deaths are said to raise no new safety issues or questions about the vaccine’s effectiveness because all represented events that occurred in the general population at a similar rate, the FDA concluded.

Its 53-page briefing report, released on Wednesday morning (Australian time) is the first detailed analysis of the vaccine trial by Pfizer and BioNTech, which found in November that its vaccine was 95 per cent effective in preventing coronavirus infections.

The documents revealed that two people who received the experimental vaccine had died during the trial. Four others who died were on a placebo.

“All deaths represent events that occur in the general population of the age groups where they occurred, at a similar rate,” the report said.

It confirmed the vaccine was, as reported by Pfizer, 95 per cent effective at least seven days after the second injection.

Data shows the vaccine was just 52 percent effective after the first dose.

The report concluded the vaccine’s efficacy data met the FDA’s expectations for emergency use authorisation.

There was, however, insufficient data for the FDA to conclude how safe the vaccine is in children under 16, pregnant women and people with compromised immune systems.

Later this week, a panel of independent scientists will assess the FDA’s report before recommending whether people aged 16 and older should receive the vaccine.

The FDA said results “showed similar efficacy point estimates across age groups, genders, racial and ethnic groups, and participants with medical comorbidities associated with high risk of severe COVID-19″. Biden sets 100-day COVID goals as cases pass 15M [NFA] President-elect Joe Biden introduced the team to lead his administration’s response to the coronavirus pandemic on Tuesday, emphasizing the mass distribution needed to achieve his goal of 100 million vaccinations in his first 100 days in office, while President Donald Trump took credit for advances in COVID vaccine development for “whichever the next administration is.” Gavino Garay has more…. 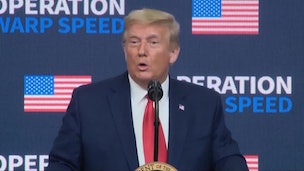 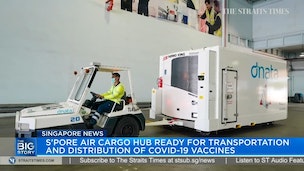 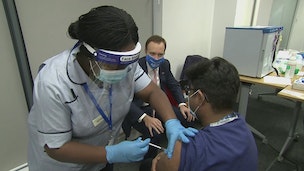 Hancock appeals for people to ‘stick by’ the lockdown rules

Dr Anthony Fauci, director of the National Institute of Allergy and Infectious Diseases, said the US might start mass vaccination later in December, given it was “highly likely” the FDA would issue an emergency use authorisation for the Pfizer vaccine.

“When it is, very soon thereafter we are ready to begin administering the vaccine to the higher priority groups,” Dr Fauci told the BBC.

Mass vaccinations could then start in the third or fourth week of December, he said.

Canada will receive nearly 250,000 doses of Pfizer’s vaccine before the end of December, while Angela Merkel’s chief of staff Helge Braun said Germany would likely begin vaccinating its people “in the very first days” of 2021.

Meanwhile, in Britain Pfizer’s vaccine is already available at 50 hospitals.

Margaret Keenan, a 90-year-old grandmother, was the first person in the world to receive it outside of a trial.

Britain’s National Health Service will give priority to vaccinating people over the age of 80, frontline healthcare workers and nursing home staff and residents.

The immunisation is given in two doses, three weeks apart. Pfizer has said side effects in trial volunteers were mostly mild to moderate, and cleared up quickly.

The most severe side effects occurred after the second dose: Fatigue in 3.8 per cent of volunteers and headache in 2 per cent. Older adults tended to report fewer and milder adverse events.

The Lancet medical journal has published a peer-reviewed report revealing the vaccine developed by the University of Oxford and drugmaker AstraZeneca is safe and effective in protecting against the coronavirus.

The researchers reported that the vaccine was 90 per cent effective in those who received a half, then a full dose.

However, more testing was needed as the independent experts who compiled the report said the group that received a half, then full, dose was too small to judge the possible value of that approach.

“[This] will require further research as more data becomes available from the trial,” the study said.

The report concluded the vaccine protected against the virus in 62 per cent of trial participants who were given two full doses.

Overall, the vaccine worked in an average 70 per cent of cases and “has an acceptable safety profile” based on data from 11,636 volunteers across Britain and Brazil.

The interim analysis of ongoing clinical trials found the vaccine to be  “efficacious against symptomatic COVID-19”.

The results are the “first full peer-reviewed efficacy results” published for a COVID-19 vaccine, the Lancet said.

SOME of the mask studies on efficacy: