‘Take off the mask!’ Thousands gather in London for ‘Unite for Freedom’ rally, demanding ‘back to normal now’ (VIDEOS)

Follow RT on Crowds of lockdown-weary Brits gathered in London at a ‘Unite for Freedom’ rally to protest the Covid-19 measures, an event quickly dubbed a gathering of “conspiracy loons” for its strong message against restrictions and mandates.

People began gathering in London’s Trafalgar Square around noon and then marched to the Houses of Parliament to show opposition to the ongoing shutdowns, introduced as part of the UK’s response to the pandemic.

The rally, called under the slogans of “No More Lockdowns – No Social Distancing – No Masks,” among others, attracted more than 10,000 people aghast at the looming prospect of another lockdown being introduced, as talk of pandemic’s “second wave” dominates the media.

One woman told The Guardian’s Jason Rodrigues that the government’s reactions to the outbreak was “completely out of proportion,” lamenting how “people’s liberties have been taken away” and arguing that it’s only going to get “worse and worse” – a common sentiment at the rally.

“People’s liberties have been taken away” Helen, who has travelled from Somerset, explains why she is at today’s anti-lockdown rally in Trafalgar Square, London. pic.twitter.com/1azRYD6DdM— Jason Rodrigues (@RodriguesJasonL) August 29, 2020

As the crowds grew, they started chanting slogans like “freedom!” and “save our rights.”

Footage showed demonstrators, many of whom did not wear masks, holding signs saying “No ‘New Normal’” and “Covid-1984,” while others outright blasted the virus as a “hoax.”

En route to #TrafalgarSquare for the #UniteForFreedom protest. If you see this sign, come say hi. 🙂@NeilClark66@DissidentDodges@RJ_Phoenix16pic.twitter.com/RuXceudWyJ— ooj (@VeritasPrimor) August 29, 2020

It is the latter that the media coverage focused on, with some headlines blasting the demonstration as a gathering of “anti-vaxxers” and “conspiracy theorists.” 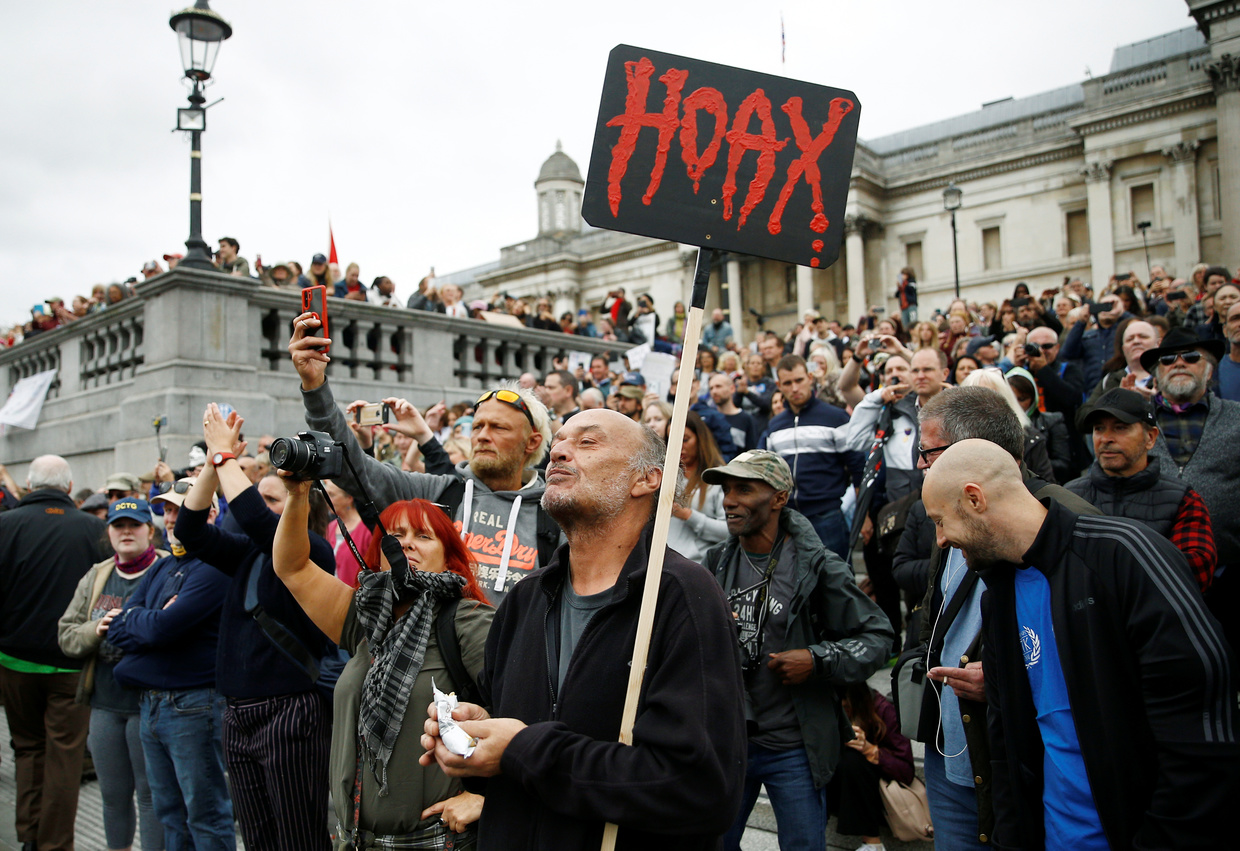 What didn’t help the rally’s reputation were the invited controversial speakers like David Icke, who gave a fiery speech proclaiming Covid-19 an “illusion pandemic” and praising the rally as an “island of sanity in a world of madness.” Social media savored the quotes.

“If you find yourself at a rally in Trafalgar Square arguing against the World Health Organisation … listening to and agreeing with David Icke … then you should seek professional advice,” musician John Spiers tweeted.

I see thousands of people are protesting in Trafalgar Square against the wearing of facemasks and “protesting against a second wave” as if a virus can be reasoned with. Good luck with that… pic.twitter.com/90UKwZM4Pb— Jody Thompson (@jodythompson) August 29, 2020

If you’re wondering how stupid Britain is right now, a group of people who refuse to wear masks to prevent the spread of the coronavirus are gathering in trafalgar square to protest a second wave of coronavirus— TechnicallyRon (@TechnicallyRon) August 29, 2020

Another speaker, Kate Shemirani, encouraged everyone in the crowd to give each other a hug and then exclaimed, “If this was a real virus, technically all of you lot should be sick.”

The gathering has received plenty of media backlash for not adhering to social distancing rules and not wearing masks – in fact, “take off the mask” became its rallying cry at one stage. Ironically, such worries have not been as widely expressed over the ongoing Black Lives Matter protests, which have also drawn massive attendance, with many ignoring Covid-19 guidances in the name of social justice.

“How many people calling today’s Trafalgar Square anti-lockdown protesters ‘covidiots’ said the same about the Black Lives Matter protests during the actual lockdown?” commenter Martin Daubney pointed out on Twitter.

London’s rally was just one in a series of recent anti-lockdown events in Europe, where increasingly many people are finding it hard to keep up with the ever-changing Covid-19 regulations and are sceptical of the difference such pandemic attributes as masks make. Also on rt.com Evidence that masks protect from Covid ‘not very strong in either direction,’ says UK’s deputy chief medical officer

Even Britain’s deputy chief medical officer said this week that evidence that masks protect from Covid-19 is “not very strong,” despite the mandates in place.

A similar protest in Berlin was disbanded by police on Saturday after they deemed demonstrators were failing to adhere to social distancing measures. Around 3,000 officers were deployed to police the crowd of 18,000.