I’ve just opened a box of expired PPE with a new date stuck on it. As an NHS doctor, I never used to believe in conspiracies…

By Malcolm Kendrick, doctor and author who works as a GP in the National Health Service in England. His blog can be read here and his book, ‘Doctoring Data – How to Sort Out Medical Advice from Medical Nonsense,’ is available here.

The boxes of surgical masks we got given last week were meant to have been used by 2017, yet they had new dates stuck on saying they’re now somehow OK until 2022. As we try to combat Covid-19, someone’s putting our lives at risk.

I am more of a cock-up than conspiracy kind of a man. I find that various avoidable disasters can far more easily be explained by simple human error than anything else. The chain of events is usually that first someone makes a horrible mistake, then the conspiracy swings into action to protect those in power from having to admit they did anything wrong.

There are times, however, when the only explanation is conspiracy. Last week was one of those times. On Thursday, everyone was clapping NHS staff for being heroes. On Friday, our unit was, quite deliberately, handed equipment three years beyond its expiry date. The date, however, had been covered over with a sticker – with a new date printed on it. 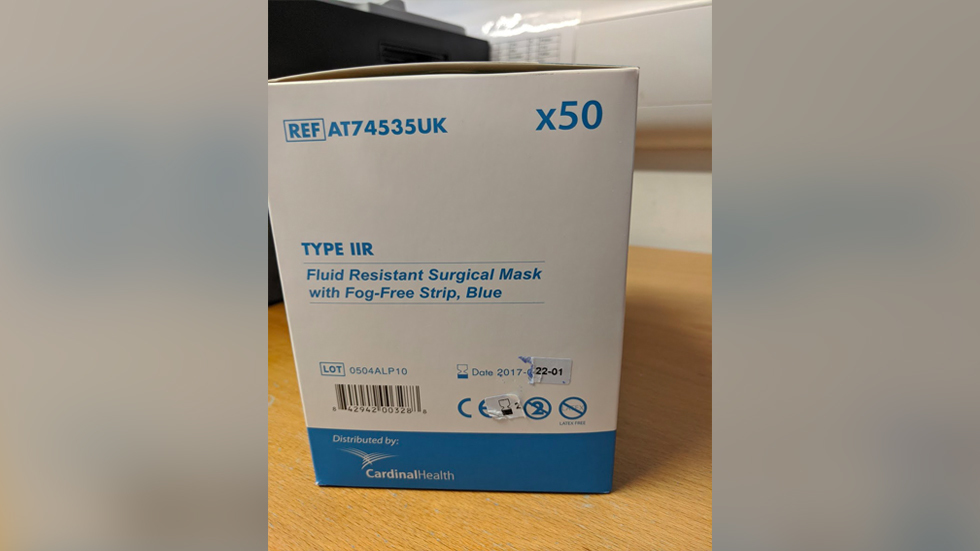 Personal protective equipment (PPE) has been a running sore since the start of Covid. Not enough, not high enough standard, and sometimes just none. Various trusts have tried to cover this up and silence whistle-blowers. Which seems to be standard operating procedure within the NHS, as highlighted by a recent report in the Independent:

“NHS doctors who have raised concerns about shortages of personal protective equipment have been warned they risk losing their jobs if they continue to speak out. More than 100 medics have contacted WhistleblowersUK to report worries about lack of PPE during the coronavirus crisis, the organisation has said.

And many of those have reported being harassed or threatened with disciplinary action – or even job losses – by NHS trust managers if they raise the issue publicly.

‘Those who have been speaking out have then received a reprimand or they’ve had a warning, especially the locum consultants, that their contracts are likely not to be replaced again at the end of the term and they are going to find themselves unemployed and likely not to be able to find a job,’ said Georgina Halford-Hall, chief executive of WhistleblowersUK.”

Bullying by NHS managers is nothing new. It appears to be their default setting.

More sinister, however, is the fact that, from fairly early on in the pandemic, there were stories from around the country about out of date PPE being distributed – with the expiry date covered over by a new, in date, sticker. I had seen none myself, but the tales carried the ring of truth.

I did wonder to myself at the time: what is the thought process going on here? “The only PPE we have is years out of date, so what should we do?” If it were me, I think I would just say something like. “Look guys, sorry, we didn’t stock enough PPE, we are desperately trying to get hold of it. In the meantime, we have this stuff in storage that is past expiry date. We are sure it’s better than nothing. We don’t think it really goes off. You OK with it?”

I mean, what else could you say? It was either that, I suppose, or ask people to go home, or wear no PPE at all. I would imagine it was at this point that the legal department was contacted, and they said something like “Nope, you cannot tell people the stuff is out of date. That opens us up to potential legal action. They would also be perfectly entitled to go home if you have no PPE for them.”

Having no PPE at all would mean an immediate crisis in staffing. So what do you do when the only PPE you have is past the expiry date?

What you do – what they must have done, I thought – is agree a budget to cover up the fact that the PPE is out of date. After that, they would have had to contact a company somewhere and ask them to print hundreds of thousands of small stickers with a different expiry date on them. This must have cost a considerable amount of money and taken several days to organise.

Then they must have employed a few hundred more people to take all the expired PPE out of their crates and, very carefully, cover over the old expiry date with a new sticker, with a new date printed on it. Then all the boxes were put back, then distributed, without telling anyone on the front line that’s what had happened.

That type of activity most certainly does not come under my ‘cock-up’ explanation of human behaviour. That fits directly under conspiracy. A direct and clear decision was made to cover-up the fact that the PPE being handed out to NHS staff had expired. A decision that required a considerable amount of time, effort, and money to try and keep secret.

This could not be a kind of “Oops, sorry, mistake” action.

All of which means that, when I heard that expiry dates on PPE were being covered up by new stickers, I kind of pushed it to one side. Surely no-one could be that conniving, I thought. Or, indeed, stupid. I mean if I were to do such a thing, as a doctor, I would be almost instantly struck off. Indeed, I would deserve to be.

Try handing out a medication three years out of date, with the expiry date covered by a sticker that you made earlier. “It’s OK, it doesn’t really go out of date.” I’d like to see that one argued in court.

Judge:      “But you knew the medication was out of date. Then you went to find someone who could print a sticker with a new date on it, to cover up the fact. You then handed it to the patient.” [Raised eyebrow].

So, imagine my bitter disappointment when one of the healthcare assistants came in with a box of surgical masks. She had heard of the old ‘new sticker trick’, so she had carefully peeled back the new sticker to reveal the old expiry date underneath. The year was 2017. The same stickers could be found on all the boxes delivered that day.

Now, I am willing to believe that surgical masks do not really have a time-critical expiry date. But I don’t know. Why would the supplier, the US healthcare giant Cardinal Health, bother putting a use-by date on in the first place if they don’t degrade?  Equally, if someone had said to us, “Sorry, but this is all we have,” I might have shrugged my shoulders and got on with it.

What I find extremely difficult to accept is that someone, somewhere, high up the management tree – probably several someones – made a deliberate attempt to cover up the expiry date. Going to great lengths to hide what they had done. Although, in truth, all it took was one sharp fingernail to reveal the deceit.

What am I going to have carved on my headstone? “Clapped on Thursday. Killed on Friday.”