PQC: Folks, please read this “NEWS” with extreme caution, and must read it between the lines! Don’t ever forget the USS Liberty, the Iran Contra, in which enemies worked with one another to deceive the people of both sides! The most important thing we must also remember is that most of the inside-sources of investigative journalists are inside-ranking intelligent officers. This means controlled “leaks” as psy-op and disinformation often are the case! As for me, I read this kind of news in order to guess-edict what their next move is in this “plandemic”, for up to this moment with things have come out, I have know doubt that this is a true plandemic. This operation is much much larger than the 911.

As always folks, Please question anything, everything, especially from MSM and Governments regardless, and draw your own conclusion. This Moon Of Alabama is really living in the moon since he swallowed what the ChiCom has tossed out so far! It’s Amazing!

U.S. Will Cover-up Its Own Coronavirus Death Toll

The Trump administration has used the novel coronavirus pandemic to malign its perceived enemies. Now as the U.S. itself is at the center of the pandemic the accusations and lies come back to bite.

On March 21 the Daily Beast reported of an upcoming propaganda campaign the White House was launching against China:

As the number of coronavirus cases continues to grow at a rapid pace in the U.S., the White House is launching a communications plan across multiple federal agencies that focuses on accusing Beijing of orchestrating a “cover-up” and creating a global pandemic, according to two U.S. officials and a government cable obtained by The Daily Beast.

The cable, sent to State Department officials Friday, lays out in detail the circumstances on the ground in China, including data on coronavirus cases and deaths, the local business environment and transportation restrictions. But it also issues guidelines for how U.S. officials should answer questions on, or speak about, the coronavirus and the White House’s response in relation to China.

The talking points appear to have originated in the National Security Council. One section of the cable reads “NSC Top Lines: [People’s Republic of China] Propaganda and Disinformation on the Wuhan Virus Pandemic.”

On April 1 Bloomberg was called up by “officials” to reinforce the campaign by attributing the claim of a cover-up of China’s case and death numbers to a “secret U.S. intelligence report”. That report is unlikely to exist at all because the New York Times reported a day later that the CIA hunt for “authentic numbers” of deaths in China was still ongoing and failing:

So far, to the frustration of both the White House and the intelligence community, the agencies have been unable to glean more accurate numbers through their collection efforts.

We used the Bloomberg report to explain that the case fatality numbers, which China reported correctly, are very different from the total number of fatalities, or excess deaths, an epidemic causes. There was no cover-up by China but naturally incomplete reporting of all deaths. A day later the BBC published a similar explainer piece.

On April 3 the Economist also discussed wrong fatality numbers though it had found those in Italy and Spain: Covid-19’s death toll appears higher than official figures suggest. It also made this snarky cover-up remark:

[W]hen Hurricane Maria struck Puerto Rico in 2017, America recorded only 64 deaths. A study later found that the surge in total deaths was close to 3,000. Many occurred in hospitals that lost power.

The excess deaths from Covid-19 in certain areas of Spain and Italy appear to be up to three times higher than the officially reported deaths. 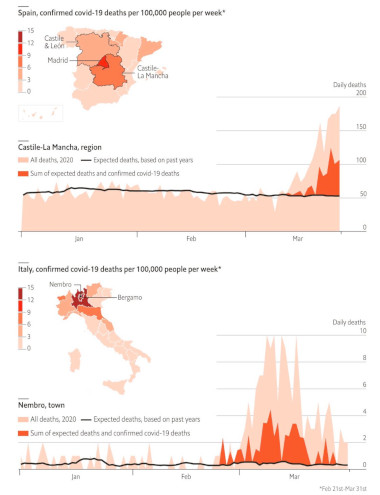 As the U.S. is now in its own catastrophic phase of the outbreak the media are finally waking up to the fact that their claim of China’s “cover-up” is bullshit.

Today both the New York Times as well as the Washingon Post report that the U.S. is “covering-up” the number of death that the pandemic  causes within its borders. The NYT headlines: The U.S. is undercounting the number of people who have died in the pandemic, experts say.

Doctors now believe that some deaths in February and early March were likely misidentified as influenza or only described as pneumonia.

Even under typical circumstances, public health experts say that it takes months or years to compile data that is as accurate as possible on deaths in infectious outbreaks.

The Post headlines: Coronavirus death toll: Americans are almost certainly dying of covid-19 but being left out of the official count

The U.S. Centers for Disease Control and Prevention counts only deaths in which the presence of the coronavirus is confirmed in a laboratory test. “We know that it is an underestimation,” agency spokeswoman Kristen Nordlund said.

A widespread lack of access to testing in the early weeks of the U.S. outbreak means people with respiratory illnesses died without being counted, epidemiologists say. Even now, some people who die at home or in overburdened nursing homes are not being tested, according to funeral directors, medical examiners and nursing home representatives.

The U.S.already “covered-up” Covid-19 casualties by not testing enough. And the U.S. CDC will now do exactly what China has done during the outbreak in Hubei province. It will only report confirmed cases and the fatalities thereof. That is exactly the “cover-up” the U.S. has accused China of.

Another Covid-19 story had been used to denigrate Iran when the Washington Post mocked the country about a row a fresh dug graves in Qom that were “visible from space” just like about everything else is:

In Qom, the spiritual center of Iran’s ruling Shiite clerics, more than 846 people have contracted the virus, officials say. Iran’s government has not released an official death toll for Qom, however, where about 1.2 million people live. But videos, satellite images and other open-source data from the cemetery — a vast complex six miles north of the city center — suggest that the number of people struck down by the virus there is significantly higher than the official figure.

Now the rows of graves “visible from space” are coming to the U.S. itself. The Chair of the New York city council sadly announced that the casualties of the epidemic will soon be temporarily buried in public parks:

Grieving families report calling as many as half a dozen funeral homes and finding none that can handle their deceased loved ones.
Cemeteries are not able to handle the number of burial requests and are turning most down. 4/

It’s not just deaths in hospitals which are up. On an average day before this crisis there were 20-25 deaths at home in NYC. Now in the midst of this pandemic the number is 200-215. *Every day*. 5/

Early on in this crisis we were able to swab people who died at home, and thus got a coronavirus reading. But those days are long gone. We simply don’t have the testing capacity for the large numbers dying at home. 6/

Now only those few who had a test confirmation *before* dying are marked as victims of coronavirus on their death certificate. This almost certainly means we are undercounting the total number of victims of this pandemic. 7/

And still the number of bodies continues to increase. The freezers at OCME facilities in Manhattan and Brooklyn will soon be full. And then what? 8/

Soon we’ll start “temporary interment”. This likely will be done by using a NYC park for burials (yes you read that right). Trenches will be dug for 10 caskets in a line.

It will be done in a dignified, orderly–and temporary–manner. But it will be tough for NYers to take. 9/

New York will continue to have a high death rate for some time while Iran now has a gradual decline of new cases. A beautiful light show (vid) was projected on the Azadi tower in Tehran to honor the fight against the virus.

Iran is also contributing to the research of the disease.

A large scale Iranian study found that three quarter of those who had milder symptoms of Covid-19 reported also a very sudden smell blindness and sometimes also a loss of taste. The ability to smell recovered only very slowly. Other research suggests that a specific type of cells in the olfactory bulb might be the first place where the SARS-CoV-2 virus attacks before it moves into the throat and then deeper into the body. Even people who did not fall ill, but were living with ill members in their family, often reported a loss of smell.

Those who experience a sudden loss of smell should therefore immediately isolate themselves to not infect others.