PQC: It’s Statist Crony Capitalism at work. Customers are guinea pigs, not God! Well, sheeple just keep joining the queue! “We” and our “governments” must protect these “job creators”, right? After all, Yoichi Shimatsu has been correct about the USA today (read his coronavirus part 5) . And if you read Andrew Joseph Galambos Sic Itur Ad Astra: The Theory of Volition, a very thick book of transcription of all of his lecturers, about one thousand pages, you would see “consumers” voluntarily contributed to their own death. Moon of Alabama barks at the wrong tree.

Bad Weather, Pilot Error Likely Caused The Pegasus Airline Accident – But Why Did The Plane Break Up?

By Moon Of Alabama

Yesterday a Turkish airplane crash landing killed three and injured some 179 people. The accident of the Boeing 737-800 seems to have been caused by a pilot mistake. But on a different airplane the outcome might have been better.

The Pegasus Airlines flight 2193 was arriving from Izmir, on Turkey’s west coast. At the time of the landing at the Istanbul-Sabiha Gökçen airport on the Asian side of the city there was a thunderstorm overhead and the wind was shifty. The air traffic controller had cleared the plane to land with wind information given as 270 degrees at 22 knots, gusting to 30 knots. This translated to a 19 knot tailwind. The 3000 meter long runway was wet.

The Boeing 737-800 is one of the Next Generation series not of the 737 MAX series. The maximum allowed tailwind for this type during landing is 15 knots. The pilots should never have attempted to land under the prevailing conditions. They did it anyway but came in too high and too fast. They missed the landing zone by a large margin. The Flightradar24 granular data shows that the plane touched ground nearly 2000 meter behind the landing zone. The runway has only a short safety zone of 65 meters at the end of the runway. The ICAO standard asks for a 300 meter safety zone.

The plane overrun the end of the runway at 64 knots and went down a 30 meter embankment. There the fuselage broke into three parts. Luckily no large fire broke out. Some footage of the landing can be seen here. 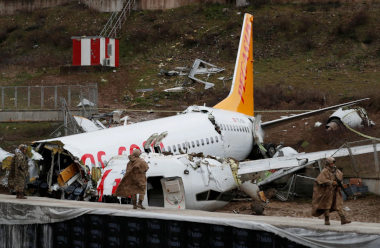 A safe landing under the prevailing conditions was difficult. The pilots attempted to land but clearly missed the landing zone. At that point they should have made a go-around. There is a switch on the autothrottle of the plane for exactly that purpose. It increases the engine thrust to the maximum and allows the pilots to climb out of such a situation. Why the pilots did not do this is yet unknown.

The Turkish budget carrier Pegasus has a rich history of accidents.

The #737 accident of @flymepegasus yesterday in #Istanbul SAW is the second runway excursion in four weeks and sixth grave incident since 2014 according to @JacdecNew database. Safety culture at the carrier seems to be a serious problem.

Bad weather, bad runway, bad airline, bad pilots are the likely factors in this accident. But the outcome would have been much better if the fuselage of the plane had stayed intact.

In this incident the 737-NG fuselage broke into three parts. The sight is familiar to those who have seen the Al Jazeerah documentary On a wing and a prayer (vid). It is about Boeing whistleblowers who discovered that one supplier delivered defective and misfitting fuselage parts but where told to shut up by Boeing’s management. The misfitting parts were installed on 737 NG planes and are suspected to be responsible for several fuselage break ups of 737 NGs involved in landing accidents

Here are screenshots from the documentary of such examples. 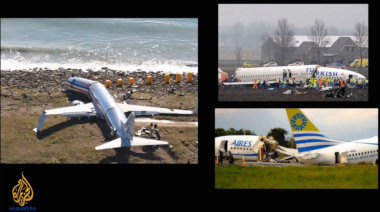 That 737 NG fuselages are prone to break apart is one of the skeletons in Boeing’s closet. That the regulators have never intervened on this issue is curious. The reasons are likely the same ones that let the faulty Boeing 737 MAX design slip through the FAA’s oversight.

—
Previous Moon of Alabama posts on Boeing and 737 MAX issues: