PQC: Until now we all, except for those Putin apologists, have seen the true face of Putin: Putin/Russia has used Syria as a bargaining chip and as a constraint measure against Iran. It’s obvious that the Jews have attacked Syria/Iran with not the complicity but the support of Putin/Russia.

1- Putin has always acted “stupidly” every time Netanyahu paid  him a “visit”. This time the attack took place while  both of them were shaking hands and smiling in Moscow. What does it all mean? We all know now that the element of Jewish controlled Cabal in Russia has tighten its grips around the Russian Bear after Putin “great election victory”.

2-The Pantsir system in Syria had been remotely disabled before the attack without the Syrian knowledge (‘It was either disabled or out of ammo’!)

The  videos showed that those (three) poor  Syrian soldiers were so relax and the “pantsir A1” was at dormant sitting duck position.  Israeli Missile Destroys Syria’s Pantsir-S1 Air Defense System

3- The very  “RT” ran the news with fucking Jewish vocabulary  “Israeli retaliation against Syrian/Iranian rocket aggression” as if it were BBC, CNN!

4- Putin reaction?  Just “call for calm from both sides”!

Better late than never, Syria has to stand up for its right of self-defense and its right to protect its territorial integrity with action. Learn it from Hezbollah.

As I have said there would be no Nuke War but regional wars until they achieve their hegemony, which is nonnegotiable. Syria and Iran  have no choice at all except fight back with all they have. Russia is not a reliable ally. Putin’s One man show will be over soon and Russia itself will be devoured from within.

Iran Breaks the Rules of Engagement: Israel Takes Its Revenge, and Syria and Iran Impose the Golan Equation 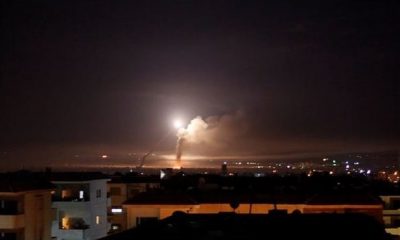 Israel hits Syrian and Iranian objectives and weapons warehouses again (evacuated weeks before) for the fourth time in a month. 28 Israeli jets participated in the biggest attack since 1974. Tel Aviv informed the Russian leadership of its intentions without succeeding in stopping the Syrian leadership from responding. Actually, what is new is the location where Damascus decided to hit back: the occupied Golan Heights (20 rockets were fired at Israeli military positions).

Syria, in coordination with its Iranian allies (without taking into consideration Russian wishes) took a very audacious decision to fire back against Israeli targets in the Golan. This indicates that Damascus and its allies are ready to widen the battle, in response to continual Israeli provocations.

But what is the reason why new Rules of Engagement (ROE) were imposed in Syria recently?

For decades there was a non-declared ROE between Hezbollah and Israel, where both sides were aware of the consequences. Usually, Israel prepares a bank of target objectives with Hezbollah offices, military objectives and warehouses and also specific commanders with key positions within the organisation. Israel hits these targets (updated) in every war. However, the Israelis react immediately against Hezbollah commanders , who have the task of supporting, instructing and financing Palestinians in Palestine, and above all the Palestinians of 1948 living in Israel. This has happened on many occasions where Hezbollah commanders related to the Palestinian dossier were assassinated in Lebanon.

Last month, Israel discovered that Iran was sending advanced low observable drones dropping electronic and special warfare equipment to Palestinians. The Israeli radars didn’t see these drones going backward and forward with their traditional radars, but were finally able to identify one drone using thermal detection and acoustic deterrence, to down it on its last journey.

In response to this, Israel targeted the Syrian military airport T-4 used by Iran as a base for these drones. But Israel was not satisfied and wanted more revenge, hitting several Iranian and Syrian targets during the following weeks.

Tel Aviv believes it can get away with repetitively hitting Iranian objectives without triggering a military response. Perhaps Israel really believed that Iran was afraid of becoming engaged in a war with Israel, with the US ready to take part in any war against the Islamic Republic from its military bases spread around Syria, in close vicinity to the Iranian forces deployed in Syria. Obviously, Iran has a different view from the Israelis, the Americans and even the Russians, who like to avoid any contact at all cost.

Israel Attacks Air Defences, Iranian Targets in Syria After Its F-16 Is Downed

Regardless of how many Israeli jets took part in the latest attack against Iranian and Syrian objectives and how many missiles were launched or intercepted, a serious development has occurred: the Syrian high command broke all rules and found no obstacle to bombing Israel in the occupied Golan Heights.

Again, the type of missiles or rockets fired by Syria against Israeli military objectives it is not important and if these fell into an open space or hit their targets. What is important is the fact that a new ROE is now in place in Syria, similar to the one established by Hezbollah over Kiryat Shmona near the Lebanese border, when militants fired anti-aircraft cannons every time Israel violated Lebanese airspace in the 2000.

Basically Israel wanted to hit objectives in Syria but claims not to be looking for confrontation. Israel would have liked to continue provoking Syria and Iran in the Levant, but claims to be unwilling to head towards war or a battle. Israel would like to continue hitting any target it chooses in Syria without suffering retaliation. With its latest attack, Israel’s “unintended consequences” or provocation has forced the Syrian government to consider the occupied Golan Heights as the next battlefield. If Israel continues and hits beyond the border area, Syria will think of sending its missiles or rockets way beyond the Golan Heights- to reach Israeli territory.

“Leave Lebanon outside the conflict. Come to Syria where we can settle our differences”.

Syria, logically, has become the battlefield for all countries and parties to settle their differences, the platform where the silent war between Israel and Iran and its allies is finding its voice.

In Damascus, sources close to the leadership believe Israel will continue to attacking targets. However, Israel knows now where Syria’s response will be. This is what Israel has triggered but didn’t expect. Now it has become a rule.

The Israeli Iron Dome is inefficient and unable to protect Israel from rockets and missiles launched simultaneously. Now the battle has moved into Syrian territory occupied by Israel to the dislike of Tel Aviv, and Russia. Iran and Syria are not taking into consideration Russia’s concern to keep the level of tension low if Israel is not controlling itself. Syria recognises the importance of Russia and its efficient role in stopping the war in Syria and all the military and political support Moscow is offering. However, Damascus and Tehran have other considerations and for the purpose of containing Israel. They have trained over 16 local Syrian groups ready to liberate the Golan Heights or to clash with any possible Israeli advance into Syrian territory.

Israel triggered what it has always feared and has managed to get a new battlefield, the Golan heights. It is true that Israel limited itself to bombing weapons warehouses never hit before. It has bombed bases where Iranian advisors are based along with Syrian officers (Russia cleared most positions to avoid the embarrassment of being hit by Israel). It is also true that Israel didn’t regularly bomb Iranian military and transport aircraft carrying weapons to Syria, or the main Iranian centre of control and command at Damascus airport. This means that not all parties are pushing for a wider escalation, so far.

Can the situation get out of control? Of course it can, the question is when!

All images in this article are from the author.