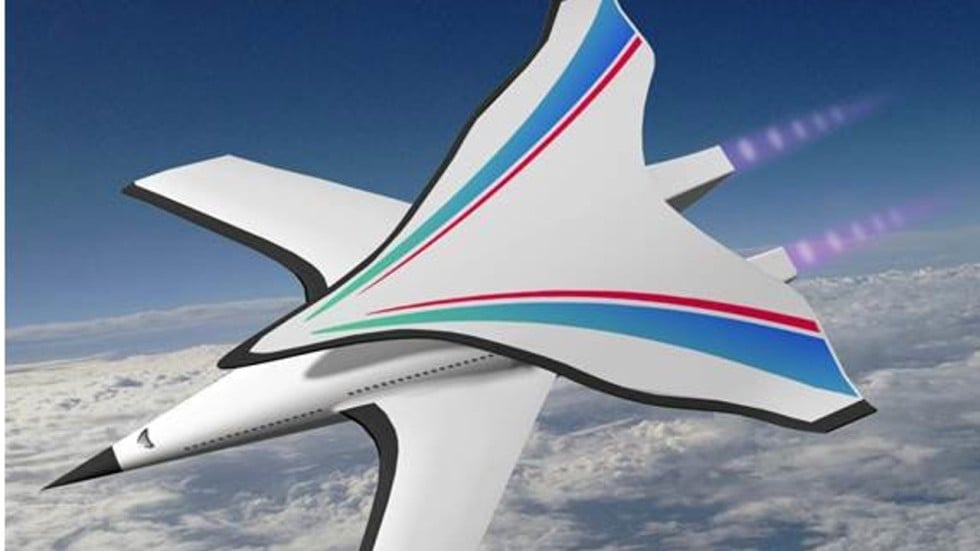 Why the US falls behind China in the hypersonic weapons race

A Chinese research team has come up with a novel design for an ultra-fast plane they say will be able to take dozens of people and tonnes of cargo from Beijing to New York in about two hours.

The plane would travel at hypersonic speed – meaning at more than 6,000km/h (3,700mph), faster than five times the speed of sound – according to the team, which is also involved in China’s top secret hypersonic weapons programme.

“It will take only a couple of hours to travel from Beijing to New York at hypersonic speed,” the researchers led by Cui Kai wrote in a paper this month in Physics, Mechanics and Astronomy, published by Science China Press.

At present, it takes a normal passenger jet about 14 hours to fly between the two cities – a distance of about 11,000km.

Why hypersonic flights may not take off in Asia, and the plane makers who hope to change that

Cui and his team at the Chinese Academy of Sciences in Beijing tested a scaled-down model of the plane in a wind tunnel which was also used to carry out aerodynamics evaluations for China’s newest hypersonic weapon prototypes.

They pushed the model plane to seven times the speed of sound – which works out to more than 8,600km/h – and found it performed surprisingly well, with low drag and high lift.

The team at the academy’s Key Laboratory of High Temperature Gas Dynamics, under the Institute of Mechanics, have called the new hypersonic vehicle the “I-plane”.

That name comes from the shadow cast by the aircraft on the ground – in the shape of a capital “I” – when it is bearing down like a dive-bomber. 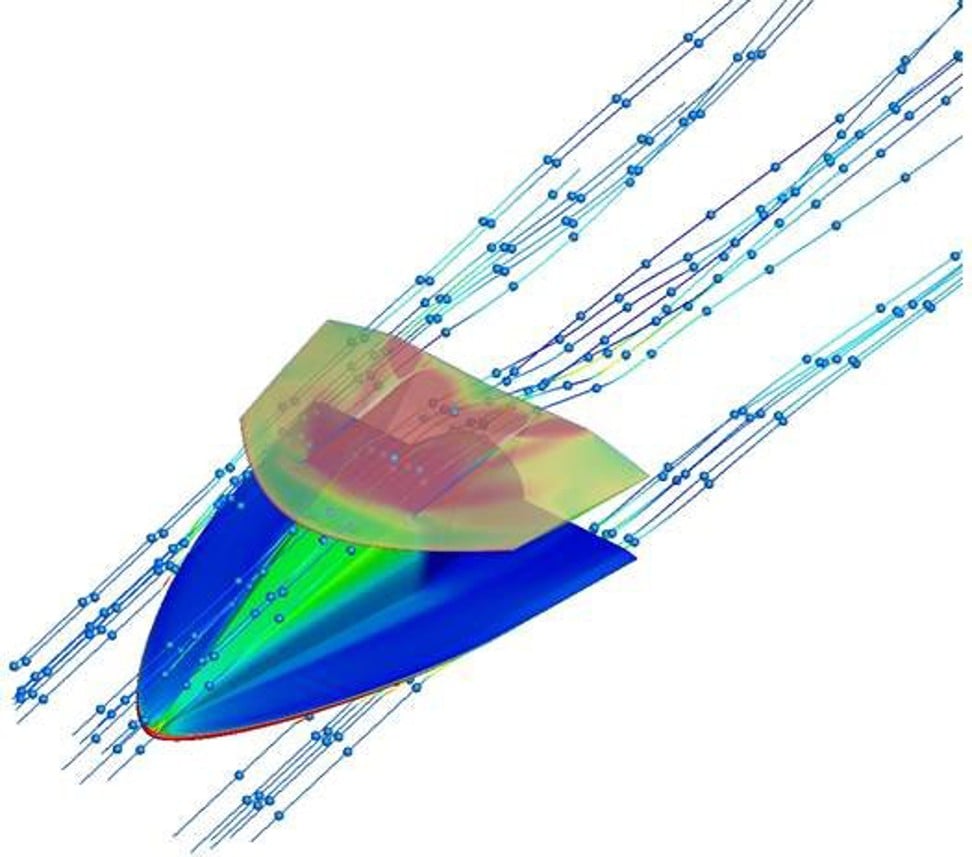 With two layers of wings, the I-plane design resembles that of biplanes used during the first world war. The earliest type of aircraft, most biplanes disappeared after the 1930s as plane designers pursued higher speeds and fuel efficiency.

Fast-forward to 2018, and China’s latest hypersonic vehicle features lower wings that reach out from the middle of the fuselage like a pair of embracing arms. A third flat, bat-shaped wing meanwhile extends over the back of the aircraft.

The researchers said this biplane design means the aircraft will be able to handle significantly heavier payload than existing hypersonic vehicles that have a streamlined shape and delta wings.

At extremely high speeds, they said the double layer of wings works together to reduce turbulence and drag while increasing the aircraft’s overall lift capacity.

Cui and his team were not immediately available for comment.

While Cui’s design has provided an answer to the aerodynamic configuration problem encountered by previous hypersonic plane models, many issues still need to be tackled for this to move beyond the conceptual stage.

All known hypersonic vehicles being developed worldwide are still in the experimental stage because of the many technological challenges that exist, and none of them can take passengers yet.

‘Falling behind’: US admiral warns of China dominance in hypersonic missile race

Major countries including China and the United States are meanwhile racing to develop hypersonic weapons, and a hypersonic vehicle would enable them to effortlessly penetrate another country’s missile defence system.

But at this stage, existing hypersonic vehicles – such as the US Air Force’s X-51 Waverider and China’s WU-14 hypersonic glide vehicle – have capacity for just a small, lightweight payload such as a compact nuclear warhead. This has severely limited the application of the technology.

Travelling at hypersonic speed will also generate a huge amount of heat, possibly exceeding 1,000 degrees Celsius (1,800 Fahrenheit), and if that heat cannot be insulated or dispersed effectively, it could prove fatal. Although researchers have found potential solutions to this problem – such as using heat-resistant materials and a liquid-cooling system to push the heat out – this aspect again is still experimental. 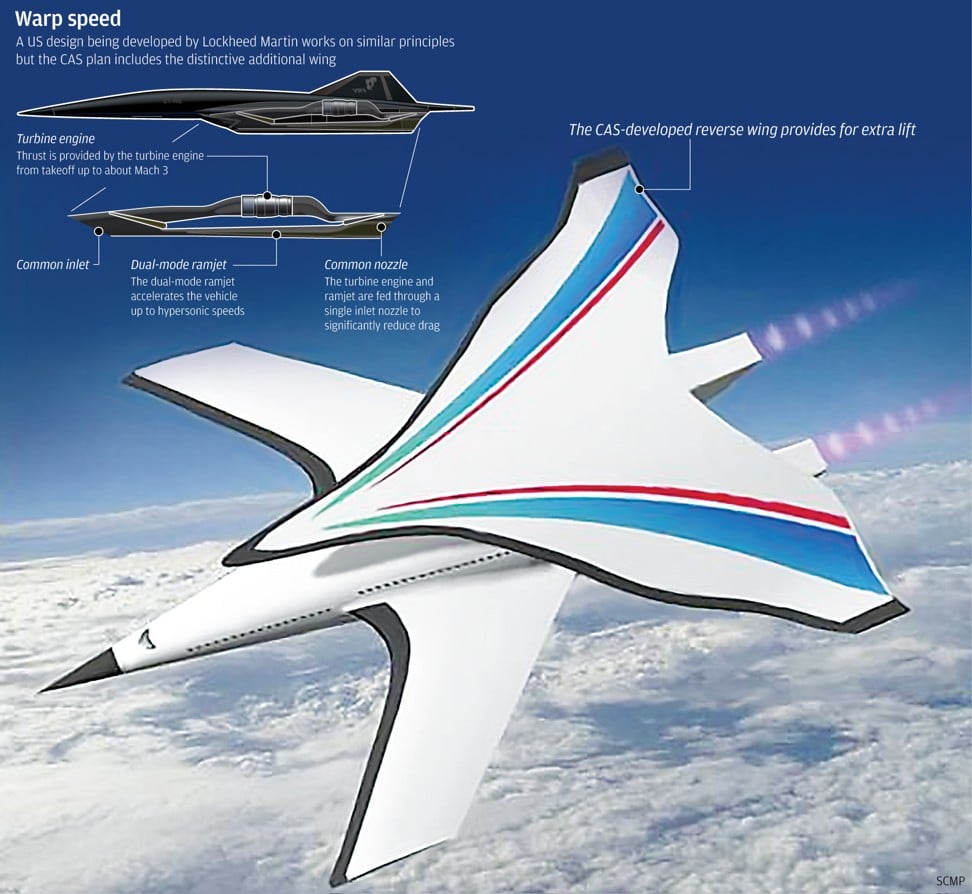 The I-plane, however, could be a game changer, according to a Chinese aircraft designer working on military research projects who declined to be named because of the sensitivity of the subject.

The researcher, who is not directly involved in the I-plane but has been informed about the project, said Cui’s team also worked on the development of China’s most advanced hypersonic weapons, so the tests would likely move from wind tunnel to open field.

He added that the hypersonic vehicle could potentially be used to transport anything from flowers to bombs, and likewise, passengers could be tourists or military special forces.

“We’re talking about something like a hypersonic heavy bomber,” he said.

The paper has sent ripples through the hypersonic research community, he added. “It’s a crazy design, but somehow they’ve managed to make it work,” the researcher said.

But the I-plane is not strictly a biplane, he said, because it has been designed to deal with different physics. At hypersonic speed, aerodynamics become counter-intuitive – the biggest force of resistance does not come from the air ahead but the waves generated by the plane itself.

China fires up advanced hypersonic missile challenge to US defences

The project reflected China’s ambition to overtake the US on developing new strategic weapons, according to the researcher.

“This will require original rather than knock-off designs,” he said, adding that the I-plane was part of a new family of aircraft in development that had not been reported until now. “It could lead to a huge step forward in hypersonic technology,” he said.

The US has also been experimenting with hypersonic aircraft. Lockheed Martin is developing the SR-72, a hypersonic reconnaissance and strike aircraft, and announced early progress on its programme in June.

In September, Aviation Week reported that a small subscale demonstrator aircraft had been spotted landing at a US Air Force facility in California, indicating early tests of the unmanned SR-72. Lockheed declined to comment directly on the sighting.

Beyond the design board, Lockheed is also working on a supersonic passenger plane. Supersonic refers to a rate of travel beyond the speed of sound; supersonic aircraft are considered the forerunners of hypersonic vehicles.

Lockheed’s Quiet Supersonic Technology X-plane (QueSST) is designed to fly at Mach 1.4 (over 1,700km/h) and at over 55,000 feet (almost 17,000m). If its development goes according to plan, the passenger jet could halve travel time from Beijing to New York to less than seven hours.

The X-plane, dubbed the “the son of Concorde”, is expected to carry out a test flight in 2020 after Lockheed recently secured funding to build the jet, according to US media reports this month.

The Concorde turbojet-powered supersonic passenger plane was in operation from 1976 until 2003. It could travel at up to more than twice the speed of sound (over 2,000km/h), with seating for more than 120 passengers. It was eventually grounded because of high costs amid a downturn in the commercial aviation industry.

China has tested various types of hypersonic vehicles over the Gobi Desert in recent years, some capable of reaching 10 times the speed of sound.

It is also building the world’s fastest wind tunnel to simulate hypersonic flight at speeds of up to 12 kilometres per second (or 43,200km/h). At such velocity, a Chinese hypersonic vehicle could reach the west coast of the United States in less than 14 minutes.

This article appeared in the South China Morning Post print edition as: ‘i-plane’ team aims for China to U.S. in 2 hours