UPDATED PQC: Make no mistake, the Jews have gradually wiped the Palestinians off this Earth. The Jews never let the Middle East to be left alone. They have been trying their best to partition Syria and they will succeed if the Russia keeps playing their game a.k.a negotiation.

At this moment, the Turks are playing “war game” with the USA in order to give the world an impression that they are “opponents”. In fact, they all give each other a pretext to sent “their boots” on the ground to take control the land while the Russians and the Jews are “discussing” the “solutions” for Syria and Middle East!  “Chaos” and “crisis” will again arise … and all “factions”, with the sponsorship of all powers involved,  will agree to partition Syria.

Syria will only be saved If Russia dares to take a main position as prime player and play their great chess game.  Russia will have to be bold and firm with not only the USA but the Jewish state with real action, then the Jews and their USA thugs will chicken out. Because if war with Russia really breaks out this time, the Jewish state will be wiped off the maps not by the Russia, but by the Palestinians and the Arabs.

However, don’t hold your breath.  Russia has been weaken by the Jews inside Moscow. And the Arab Muslim world is backward and so divided.

If Russia is serious about  her future and her standing in this so-called great chess game, She’d  better focus on building a strong  “Muslim neighborhood” around her. These neighbors will not only be Russia’s first layer fences but also her “domestic” market. Of course if and only if Russia know how to utilize her strength.

Until then, the future of Syria is doomier even after the ISIS.

It’s a dirty old war. The city of Afrin, supposedly threatened with cataclysmic assault by the Turkish army, is open as usual, its shops doing apparently good business, its restaurants welcoming customers, its taxis lined up for customers, its Kurdish fighters manning the occasional checkpoint with weary obedience.

As for the Russians who, we have been told by news agencies and many others, have left – well, they are still here, at least during the day. I myself watched a Russian armoured personnel carrier – marked “military police” in Russian and Arabic but with the two-headed Russian eagle on the front – negotiate the checkpoint from the Syrian military line on the edge of Aleppo province into the Kurdish controlled Syrian province of Afrin.

Now you see them, now you don’t. “They pulled out of their big base when they said they did,” a YPG official – the YPG is the people’s “protection force” without much means to protect anyone, or so it would seem – told me rather slyly. “But they pay us visits during the day.”

You bet they do. The Russians are as keen to monitor on the ground (as they are in the air) just how far Turkey’s army really intends to go in its much proclaimed invasion of northern Syria. So far – and such Churchillian phrases should be used sparingly – the Turks appear to be sheep in sheep’s clothing. Only a few tanks have actually been seen by the Kurdish fighters north of Afrin and almost nothing at all of the Free Syrian Army militia which – famous in fantasy and fiction from David Cameron’s woeful “70,000 strong” force of parliamentary history – does not appear to play any role at all in this latest Syrian adventure.

The reality, whatever you may believe from the great and the good of political life, is that Afrin city has itself not been bombed once, and is totally undamaged. Not so, of course, the villages to the west and north. A few miles from the southern entrance of Afrin city, they are digging new graves for the latest “martyrs” – mostly Kurdish military, but also civilians whose families wish their relatives to be interred alongside the dead of the latest Kurdish war – and new earthworks are being readied beyond the plastic-flowered graves for the next to fall on the field of battle. But there are no grieving families yet to shed their tears upon this cold, marble-walled place. 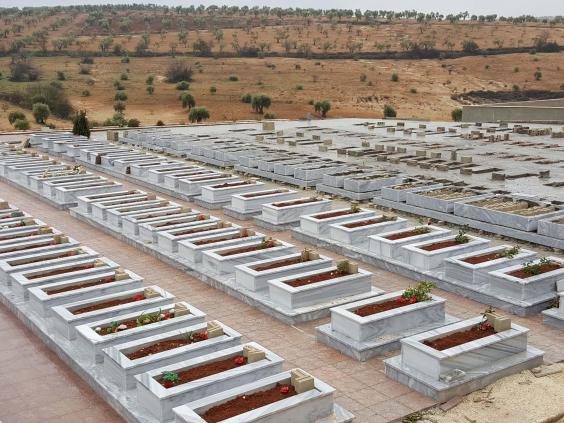 The Kurdish ‘martyrs’ cemetery outside Afrin. Many of the dead in the marble graves were killed fighting Isis during the Syrian war

Indeed, there is something curiously barren about the whole war in Afrin. A YPG official – as much military as political – agreed with me when I said that if the Turkish President really threw his entire army, along with their largely mythical “Syrian” FSA militia, into the province of Afrin, they would have got into the city in half an hour. Always supposing they have enough officers still unarrested for anti-Erdogan subversion. We Westerners, of course, like to see the YPG and its associated chums in neighbouring bits of which should have been Kurdistan – if the Americans had not ratted out of their League of Nations commitments after the First World War – as heroic and turbaned warriors.

I was thus a little shaken in one small village to see a pick-up load of black-uniformed gentlemen, all holding automatic weapons and with black bandanas around their faces – the words “no photos” were uttered immediately – driving at speed towards the Kurdish-Turkish front line. It wasn’t as if they didn’t have the right to fight Turkish aggression. They just weren’t the kind of chaps you are used to seeing in friendly television reports. So, too, the “wallpaper”, if that is how we must call the graffiti of war.

Inside Afrin, the true victims of Turkey’s invasion of northern Syria

For the very moment you cross from the Syrian army’s last checkpoint – red, white and black flags and a poster of Bashar al-Assad, his brother Maher, Hezbollah leader Hassan al-Nasrallah and prominent army colonel “Tiger” Suheil (please note the latter), you find yourself amid blue-and-white-coloured concrete ramps, the “star” banner of “Kurdistan” (which, like “Palestine”, does not exist) and a gigantic picture of Abdullah Ocalan, the PKK (Kurdish Workers Party) leader for whom the YPG has absolutely no connection whatsoever. Or so they tell you.

The YPG, squeaky clean in all things PKK-ish, will tell you that they admire some of Ocalan’s views – even quite a lot of his opinions, and one cannot but fall for the non-sectarian, secular “ethos” of the guy – but are not part of the PKK. It’s a bit like hearing that Nigel Farage didn’t really mislead the UK about Brexit or that membership of the Nazi party didn’t imply that party members loved the Führer. In the Afrin hospital, the coloured portrait of Abdullah Ocalan is so massive (moustache a bit overdone, I thought) – and so high – above the reception desk, that you could get a severely strained neck if you spent too much time looking at it.

And there is the point. Listen long enough to the ramblings of Mr Erdogan – I keep having to tell the Kurds to pronounce the “g” of Erdogan correctly as a “w” – and you might start believing that the YPG really is a “terrorist” group threatening the sovereignty of Turkey. Who funds this little Ruritania, after all, not to mention the hospitals? (The locals, I am told, in taxes, and private payments if they are patients). So while the Kurds try to persuade you of their potential loyalty (still) to Syria and disclaim any connection to the rest of Kurdish Syria (east of Qamishli) and the Iraqi Kurds – clearly a lie – they have to proclaim their belief (quite correctly) in their own form of self-government.

But there is a smell of “control” about this place – a point to which I shall return – and a feeling that all is not as it seems. The Kurds here – not publicly, of course – maintain their good contacts with the Russians, including those smartly dressed Russian military policemen with their red, white and blue shoulder flashes who pop into Afrin for their daily visits. The Russians, needless to say, are quite right to keep an eye on events in Afrin, just in case Erdogan goes a bit too far. Or in case the Kurds do the same.