The Row over Jerusalem Gives American Jews a Tough Choice 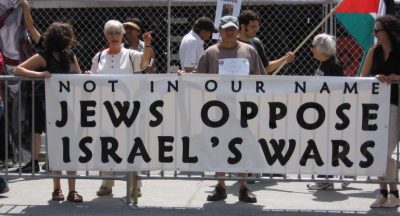 For decades most American Jews have claimed an “Israel exemption”: resolutely progressive on domestic issues, they are hawks on their cherished cause. Racism they would vigorously oppose if applied in the United States is welcomed in Israel.

Reports at the weekend suggested that Donald Trump is about to recognise Jerusalem as Israel’s capital, throwing a wrench in any peace plan. If true, the US president will have decisively prioritised support for Israel – and pro-Israel lobbies at home – over justified outrage from Palestinians and the Arab world.

But paradoxically, just as American Jews look close to winning the battle domestically on behalf of Israel, many feel more alienated from a Jewish state than ever before.

There has long been a minority of American Jews whose concerns focused on the occupation. But until now their support for Israel itself has been unwavering, despite its institutionalised racism towards the one in five of the Israeli population who are Palestinian.

A Law of Return denies non-Jews the right to migrate to Israel. Admissions committees bar members of Israel’s Palestinian minority from hundreds of communities. A refusal of family reunification has torn apart Palestinian families in cases where one partner lives in Israel and the other in the occupied territories.

Most Jews have justified to themselves these and many other affronts on the grounds that, after the European holocaust, they deserved a strong state. Palestinians had to pay the price.

Given that half the world’s Jews live outside Israel – the great majority in the US – their support for Israel is critical. They have donated enormous sums, helping to build cities and plant forests. And they have lobbied aggressively at home to ensure diplomatic, financial and military support for their cause. But it is becoming ever harder for them to ignore their hypocrisy.

The rift has grown into a chasm as Benjamin Netanyahu’s right-wing government widens its assault on civil rights. It now targets not just Palestinians but the remnants of liberal Jewish society in Israel – in open contempt for the values of most American Jews.

The peculiar catalyst is a battle over the most significant surviving symbol of Jewishness: the Western Wall, a supporting wall of a long-lost temple in Jerusalem.

Jews in the US mostly subscribe to the progressive tenets of a liberal secularism or Reform Judaism. In Israel, by contrast, the hard-line Orthodox rule supreme on religious matters.

Since the 1967 occupation, Israel’s Orthodox rabbis have controlled prayers at the Western Wall, marginalising women and other streams of Judaism. That has deeply offended Jewish opinion in the US.

Trapped between American donors and Israel’s powerful rabbis, Netanyahu initially agreed to create a mixed prayer space at the wall for non-Orthodox Jews. But as opposition mounted at home over the summer, he caved in. The shock waves are still reverberating.

Avraham Infeld, a veteran Israeli liaison with the US Jewish community, told the Haaretz newspaper this week that the crisis in relations was “unprecedented”. American Jews have concluded “Israel doesn’t give a damn about them”.

Now a close ally of Netanyahu’s has stoked the fires. In a TV interview last month, Tzipi Hotovely, the deputy foreign minister, all but accused American Jews of being freeloaders. She condemned their failure to fight in the US or Israeli militaries, saying they preferred “convenient lives”.

Her comments caused uproar. They echo those of leading Orthodox rabbis, who argue that Reform Jews are not real Jews – and are possibly even an enemy.

According to a report in the Israeli far-right newspaper Makor Rishon, which is owned by Sheldon Adelson, a US casino billionaire and Netanyahu’s patron, the Israeli prime minister set out his rationale for sacrificing the support of liberal Jews overseas at a recent closed-door meeting with officials.

He reportedly told them that non-Orthodox Jews would disappear in “one or two generations” through low birth rates, intermarriage and more general assimilation. Liberal Jews were a “lost cause” in his view, and wedded to a worldview that was incompatible with Israel’s future.

Both on demographic and ideological grounds, he added, Israel should invest in cultivating stronger ties to Orthodox Jews and Christian evangelicals.

Netanyahu’s demographic predictions may turn out to be faulty, but they are clearly now driving his policy towards liberal Jews at home and abroad.

In fact, as Israel’s attacks on liberals in Israel echo Trump’s rhetoric and policies towards minorities in the US, American Jews are gradually being forced to reassess their longstanding double standard towards Israel.

For some time the Netanyahu government has tarred Israeli anti-occupation organisations like B’Tselem and the soldier whistle-blowing group Breaking the Silence as traitors. Last week it widened the assault.

The education minister, Naftali Bennett, accused the veteran legal group the Association for Civil Rights in Israel (ACRI) – Israel’s version of the American Civil Liberties Union (ACLU) – of “supporting terrorists”. Forty years of ACRI programmes in schools are in jeopardy.

The move follows recent decisions to allow pupils to provide racist answers in civics exams and to expand gender-segregation to universities. Meanwhile, two new bills from Netanyahu’s party would crack down on free speech for Israelis promoting a boycott, even of the settlements. One proposes seven years in jail, the other a fine of $150,000.

And for the first time, overseas Jews are being grilled on arrival at Israel’s airport about their political views. Some have signed a “good behaviour oath” – a pledge to avoid anti-occupation activities. Already Jewish supporters of boycotts can be denied entry.

The Netanyahu government, it seems, prefers as allies Christian evangelicals and the US alt-right, which loves Israel as much as it appears to despise Jews.

Israel is plotting a future in which American Jews will have to make hard choices. Can they continue to identify with a state that openly turns its back on them?

A version of this article first appeared in the National, Abu Dhabi.

This article was taken from Jonathan Cook.

Jonathan Cook won the Martha Gellhorn Special Prize for Journalism. His books include “Israel and the Clash of Civilisations: Iraq, Iran and the Plan to Remake the Middle East” (Pluto Press) and “Disappearing Palestine: Israel’s Experiments in Human Despair” (Zed Books). His website is http://www.jonathan-cook.net.

Featured image is from Countercurrents.