PQC: Of course not! No one can look away if one is a true human being. But THEY can. They created this tragedy as part of their political game.  In the so-called political great game, on the great chess board, human life, life of ordinary people is not worth even a pawn. Human life is just dirt, which need to be wiped out of the chess board.

I’ve been an anarchist for years, but the more I see the so-called Real politic exposing itself everyday with its inhumanity and  destructive nature from local to global scale, the deeper I commit myself to anarchy.

‘How can you look away?’ British lifeguard describes true horror of Mediterranean migrant crisis

@ Marcus Drinkwater
AddThis Sharing Buttons
Share to Facebook142Share to TwitterShare to RedditShare to StumbleUponShare to Google+Share to Tumblr
British lifeguard Austin Wainwright has been on the front line of the migrant crisis in the Mediterranean. Speaking out for the first time, he describes for RT the human tragedy of Europe’s neglect unfolding at sea and its emotional toll.

It is getting dark now, and still no news. The rescue vessel rolls with the swell and although we are upwind of the body, the smell reaches us every now and then. 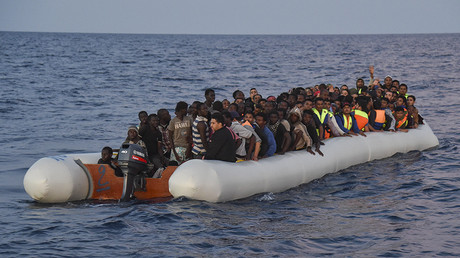 We cannot risk being further away for fear of losing it in the dwindling light, and eventually we decide to attach a chemical light stick to the ankle.

We have been sitting in the Mediterranean, 17 nautical miles from Tripoli and Sabratha, for almost six hours now, ever since we came across the floating body while on a search for the remains of a sunken rubber boat. This poor soul did not come from that boat; the body has been in the water for around four days and marine life has not left it alone.

Sole and Nicolas, the lifeguards I am working with, tenderly attach the light stick as I manoeuvre the RHIB (Rigid Hull Inflatable Boat) delicately.

We feel sick. Not so much due to the smell or sight of this person, but because of the apathy coming from Europe.

This is the second migrant crisis I have experienced, the first being with the Spanish Red Cross in the Canary Islands (2006-2008). I arrived here thinking it would be the same, thinking I knew what was happening. I have been very much humbled.

We sit in silence waiting again for MRCC Rome (Maritime Rescue Coordination Centre) to confirm we can recover the body. We feel that support would have been far quicker if it were a European body. The smell washes over us again; a smell that I still remember vividly months later.

To pick up one single body may seem pointless. More than 2,500 people have drowned this year while fleeing poverty, persecution and violence in Africa and the Middle East.

Their main point of departure is Libya – a country torn apart by war and with a Central Government that only manages to control a fraction of the country. The rest is run by warlords and militias who have various, shifting alliances.

The EU recognizes the GNA (Government of National Accord) in Tripoli as the official ruling entity, supplying the Libyan Coast Guard (LCG) with money, training and patrol vessels in an effort to curb migrants and refugees leaving its northern shore.

Recently the LCG announced it would handle all search and rescue missions up to 70 nautical miles from its coast. It is one thing to say this – and another to be competent enough to do it.

What is clear to all NGOs is that this would cause more loss of life. Those who are ‘rescued’ by the LCG will be taken back to Libya where they are kept in squalid camps, detained, beaten, raped and killed.

Since I have been volunteering here the LCG has become more and more hostile, and we have on two occasions had warning shots fired over us. The third time our vessel was held at gunpoint and almost forced to Tripoli.

All of these instances occurred in international waters, and while working on search and rescue operations coordinated by MRCC Rome. When we requested support from Rome and FRONTEX (the European Coastguard Coalition) our calls fell on deaf ears. We went from being under their coordination to being alone.

Refugees and migrants returned by the LCG face a fate worse than death in makeshift detention centers. Time and again they tell us they would rather die at sea than return to “The Country of the Devil.”

On every rescue we are told about the treatment they received in Libya. Women are raped systematically, so much so that there are cases where those brought aboard the rescue vessels run by our NGO, Proactiva Open Arms, are unable even to sit down.

Sexual and other violence does not end with the women. It is used to coerce family members in the countries of origin to pay ransoms. This also involves beatings and other unspeakable acts. 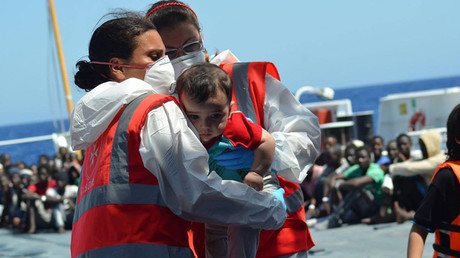 One man from Ghana told me how he witnessed his best friend’s legs doused in petrol and set alight as his Libyan captors held a phone to his head so that his family would hear him scream. Others tell of being sold as slaves, forced to work until they either escape or are allowed to leave. In some cases we are told of people being returned by the LCG and sold directly back to smugglers and slavers.

How is it that the EU and Italy can justify cooperation with these countries?

How can the public look away?

A friend told me the answer is simple. It is easier to blame migrants for our countries’ problems than to admit the truth. If we admit the truth about Africa then we admit our own way of life is fragile. We wouldn’t sleep at night. Ignorance is bliss, they say.

It is dark now and finally we get the all clear from MRCC Rome to pick up the body. The recovery takes a long time because it has been in the water for so long. Some may argue it is futile. Why not leave him there?

To us he is still a person with a family, he deserves better and we will not let the EU sweep this one under the rug. When we finally step aboard our main ship from the RHIBS we are tired.

The other volunteers hug us as tears of frustration sting our eyes.

The next morning another body is found. No one wants to do this again but we have to. It is why we are here.

As I suit up, a refugee rescued alive the previous morning looks at me and seeing my face asks “are you going for another body?”

I choke and can’t speak, so I nod my head. Silently he mouths “thank you.”

– Proactiva is one of the only NGOs remaining in the Med after rescuing more than 35,000 people in international waters over the last two years