For nearly two years now we have been following the dedicated work of Robert Stuart in exposing the possible fabrications behind the infamous BBC Panorama documentary “Saving Syria’s Children.” On June 11 he gave a public presentation summarising his work to date, which is also available as a PDF. As an overview of the evidence in the case, it is well worth reading. You can download it HERE. And below are some of the highlights.

First a brief reminder of the back story:

On August 29 2013, as the UK Parliament was about to vote on possible military action against the Assad government in Syria, the BBC’s 10 o’clock news aired a segment titled Syria crisis: Incendiary bomb victims ‘like the walking dead’ in which it was claimed a Syrian fighter jet had dropped an incendiary bomb containing a “napalm-type” substance on the playground of the Urm al-Kubra school near Aleppo. The BBC claimed its own team “inside Syria filming for [the documentary series] Panorama” had been witnesses to the victims arriving at the Atareb hospital, and it aired a segment of footage showing incoming casualties. This footage later formed the basis for the documentary “Saving Syria’s Children.”

The discrepancies and other problems surrounding this footage and the BBC documentary are legion. We have documented some of them here and here and here, and Robert Stuart’s blog offers a detailed database that puts it beyond doubt the BBC has not been entirely honest about the origins of and motives behind this film.

The Reality of the Alleged Injuries

The injuries visible in the BBC footage have been questioned by medical professionals: 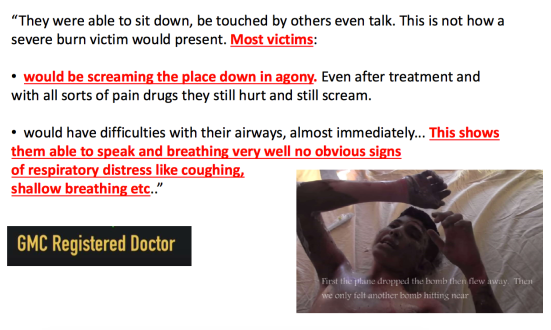 Can our readers see any sign of injury on this – thankfully – healthy-seeming little baby, let alone ’80% burns”?

Number and Identity of Victims

In a real event the number of victims, their names, backgrounds and photos should be reasonably consistent. Wide disparities would be hard to reconcile with something happening in the real world. Especially so in this case, given the people giving us the figures were allegedly there on the scene either treating the victims hands-on or filming it being done. You’d expect a pretty clear and definite report on the numbers treated in the quite small Atareb hospital. But this doesn’t seem to be the case: 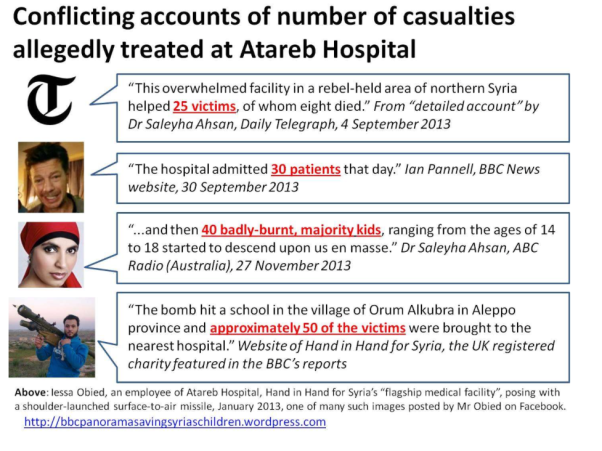 How is it that Dr Ahsan, who was right on scene, first claimed there were “25” victims, but in a later interview almost doubled the number to “40”, while Ian Pannell claimed there were “30” victims treated at Atareb that day, and Rola Hallam’s Hand in Hand For Syria website trumped them all, claiming “50” of the victims were brought to Atareb?

Did neither Dr Ahsan nor Ian Pannell, nor the Hand In Hand for Syria website make any effort to obtain a definitive account of the numbers they treated? Were they just grabbing figures at random?

It ought to be possible, in today’s interconnected age, to determine when an event occurred with a maximum disparity of – say – one or two hours if the event occurred in a remote rural location and much less if it was in an urban setting with numerous witnesses. Of course some variation in the accounts of those present is to be expected, because humans are fallible and the events themselves are traumatic and confusing. But even so there is a minimal standard of consistency we need to demand.

Yet look at the huge disparity of timings offered up about this event:

The fact that different sources can place the alleged attack on the Urm al-Kubra school as much as six hours apart is very hard to reconcile with any form of veridical reality.

Let’s remember there was a BBC camera crew right there to record these events. Even allowing for shock and confusion, we might expect Ian Pannell, the reporter, and his award-winning cameraman, Darren Conway to pin down the timing pretty firmly. But Pannell says the events happened at “around 5:30”. Conway says “I don’t know, it was somewhere between 3 and 5.”

“I don’t know”? “It was somewhere between...”? “Around 5:30”? This isn’t quite the stringent attention to detail we might expect from professionals in a war zone. Surely they can pin it down a bit closer than that? How come Pannell has ended up thinking it was at least two and a half hours later than the earliest time given by Conway? Didn’t they discuss the timing with one another after the event? Don’t they have phones or watches? Doesn’t any of their footage have a time code?

Dr Saleyah Ahsan, one of the two British medical personnel to appear in the Panorama documentary, and filmed attending to the alleged victims, is a former British Army captain, trained at the elite Sandhurst military academy, who served in Bosnia and went out to Libya to “support the revolution”, before staying on to give medical service to the “fighters” (presumably the NATO-backed “rebels”).

I’m sure we can all agree this is definitely not the profile of someone in Military Intelligence. 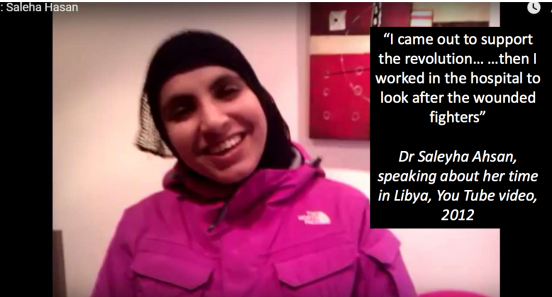 Interestingly, her ex-CO now runs medical simulation training exercises, as Saleyah herself revealed in passing when she was sent to cover the exercises by BBC Newsnight 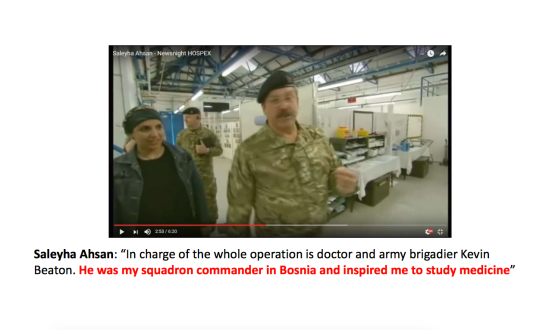 The below images are of FAKE INJURIES provided by a professional medical simulation firm. You might argue they look more convincing than anything seen on the BBC Panorama program.

Saleyah’s connections are as curious as those of the other British doctor present during the filming of alleged casualties at the Atareb hospital, Dr Rola Hallam, executive on the board of the Hand in Hand For Syria charity, and whose father Dr Mousa al-Kurdi, may or may not be connected with the self-styled “Syrian National Council”, a supporter of the terrorists/“rebels” and a barely-concealed front for western-backed interests in Syria. He certainly seems to be no friend of the current Syrian president. 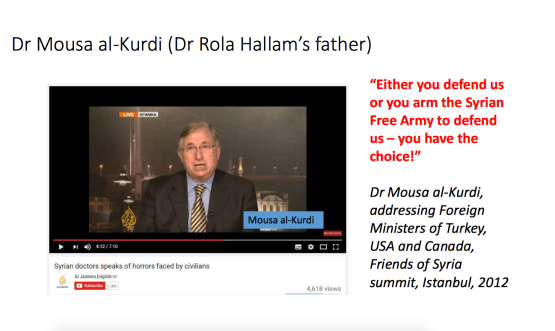 We say “may or may not be connected with the SNC”, because Rola Hallam is on record denying her father is a member of the SNC, while her colleague seems to be of a different opinion:

These women clearly need to work harder at co-ordinating their narrative.

The evidence for some form of fakery here is now undeniable. Not only are some of the major players shown to be previously involved in pro-western regime change narratives and/or politically active in the bid to unseat Assad, but the footage taken by the BBC itself shows clear signs of being less than real. The alleged injuries look questionable, not simply to lay people but to medical professionals. The narrative is inconsistent, the timing extremely convenient for the pro-west, pro-NATO agenda.

What does this mean in a wider context? If the BBC and elements of the British medical profession have – as seems highly possible – colluded to produce fake news of a fake event, how should we view other such convenient narratives involving alleged loss of life, implicating acknowledged enemies of the West, and seeming to justify more wars of intervention, more surveillance, more curbs on our freedom? What if an event were to happen in future in – say – Berlin, New York, London, Melbourne that has all the same hallmarks of questionable-seeming injuries, vague timelines, vague or poorly sourced victim-lists, and a seemingly pre-prepared perp that plugs right in to the west’s current hate-list or perpetual war agenda?

How parochial or racist is it for us to to assume fakery is a priori impossible when the victims are mostly white and have Facebook pages?

All images in this article are from the author except for the featured image.

The original source of this article is OffGuardian
Copyright © Catte, OffGuardian, 2017