China’s AIIB: What You Need to Know

by James Corbett
TheInernationalForecaster.com
March 25, 2015
The business newswires have been atwitter with talk of the “AIIB” so much in the past two weeks that the average person can be forgiven for not even knowing what the AIIB is, or why this story is receiving so much attention. Never fear, The Corbett Report is here to fill in the pieces of the puzzle.
What is it? 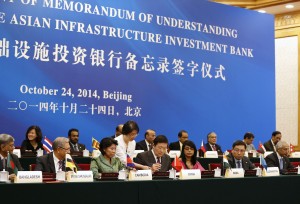 The “AIIB” is the Asian Infrastructure Investment Bank, a new multilateral development bank first proposed by Xi Jinping in a speech to the Indonesian parliament in October 2013. At the time, Xi explained that “to support the process of interconnection and integration of the economic development in the region, China has proposed to build the Asia infrastructure investment bank and provide financial support to infrastructure development in developing countries in the region.”
The bank was formally established on October 24, 2014 in a ceremony in Beijing where 21 founding members signed the bill. Negotiations on the articles of agreement for the bank are ongoing and expected to be completed before the end of the year. It is expected that the bank will be capitalized with between $50 billion and $100 billion, most of which will be provided by China.
Who is it?
The founding members of the bank were China (obviously), India, Thailand, Malaysia, Singapore, the Philippines, Pakistan, Bangladesh, Brunei, Cambodia, Kazakhstan, Kuwait, Laos, Myanmar, Mongolia, Nepal, Oman, Qatar, Sri Lanka, Uzbekistan, and Vietnam. Since then, 13 more members have joined the bank, perhaps most notably the UK, France, Germany and Italy, as well as New Zealand, while Australia, South Korea and Taiwan are currently considering joining despite America’s well-publicized admonitions to its allies that joining the bank would be tantamount to “accommodation of China, which is not the best way to engage a rising power.”
Of course, that was before the dam broke with the IMF, the World Bank and the Asian Development Bank all coming out in favor of the AIIB. Now, Washington’s tune has changed significantly, with US Treasury Under Secretary for International Affairs Nathan Sheets saying “The US would welcome new multilateral institutions that strengthen the international financial architecture.”

Leaders launch the New Development Bank at the 2014 BRICS Summit

Didn’t this all happen last summer?
No, that was the formation of the BRICS’ “New Development Bank,” announced at the 6th BRICS Summit in Brazil. The NDB is now very much on the back burner as China throws its weight behind the AIIB, which is more directly under its influence, leaving India and other BRICS partners wondering just how committed China is to the NDB at all anymore.
What will the bank do? 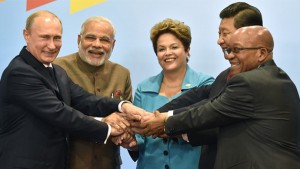 As a development bank, the AIIB will fund infrastructure development and invest in projects to contribute to the economic development of the Asian region. A 2009 report from the Asian Development Bank estimated that between $8 and $13 trillion of investment would be needed through the course of this decade to keep Asia on its economic development path.
Many of China’s neighbors, allies and trading partners in Asia need massive investment in basic infrastructure like reliable electricity, access to clean water, sanitation facilities and transportion. The AIIB, with its $50 billion in registered capital, will obviously only be a drop in the bucket in providing such investment, but it is expected to make a noticeable difference in the region.

Why is China doing it?
Of course, as recipients of IMF and World Bank “aid” over the years learned long ago, the idea of “infrastructure development” is not so politically neutral or economically beneficial as it sounds. China’s eagerness to start converting some of its excess foreign reserves into international political capital and soft power is understandable, but it has long faced the problem of doing so in a way that doesn’t invite comparison to the American empire of the past 70 years. China has been increasingly viewed with skepticism and concern by many of its Asian “partners” in recent years. 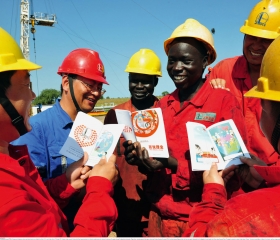 The AIIB may be the perfect tool to throw some of China’s money around without being seen as attempting to meddle in other nations’ affairs. As the controlling interest in the AIIB, Beijing will be able to direct money toward investments (like helping Laos construct its end of the Kunming-Singapore Railway) that benefit China directly, both economically and politically, all under the guise of “development.” It will also likely contribute to the internationalization of the RMB which is seemingly China’s number one priority in the run-up to this year’s SDR basket review by the IMF.
So what’s the big deal?
This much is undeniable: China is a rising power. The US is in decline. Washington-led organizations like the IMF are no longer reflective of the true economic balance of power in the world, and thus the US is concerned about the rise of counter-institutions like the BRICS, the AIIB, etc.
But what does this all mean? There are three perspectives on this.
The first is the mainstream western perspective. This holds that the US is the world’s main force of peace and stability in the world and thus the rise of China is inherently ominous. In this picture China and its economic partners, Russia first and foremost amongst them, are existential threats that need to be contained either by cooperation or confrontation.
The second is the alternative media perspective. This is by and large the idea that the US and its allies are the main force of death, destruction and economic enslavement in the world and thus the rise of China and the birth of an alternative, BRICS-led multilateral structure is to be cheered. In this picture any and all opposition to the policies of the NATO block or its ability to operate hegemonically is a good thing. 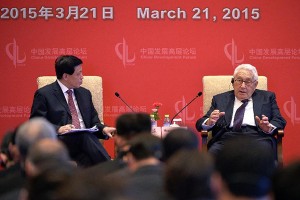 Then there’s my perspective. Firstly, I question why and how China has been allowed (or, more accurately, actively aided) to rise to “emerging power” status by the very same kingmakers and oligarchs who have presided over the age of Pax Americana. I see the growth in power and influence of oppressive and tyrannical regimes as an unmitigated disaster, whether it’s the tyranny of the NATO powers or the tyranny of the forced-abortion, one-child-policy, total-internet-censorship, literal-one-party-dictatorship Chinese Communist Party. And I see the rise of an alternative structure of global governance to be equally as poisonous as the existing structure of global governance (and, in fact, part of the plan all along to create a dialectic from which “global government” is the only possible synthesis).
I will have more to say on this in my next episode of The Corbett Report podcast which will (hopefully) be released later this week. In the meantime, keep your eye on the AIIB story. It’s one of those cypher stories from which you can discern much more about global geopolitics than a simple story about a development bank would seem to say.