Making the World a More Dangerous Place: The Eager Role of 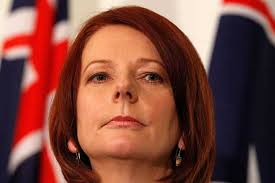 October 24, 2012 “ – The Australian parliament building reeks of floor polish. The wooden floors shine so virtuously they reflect the cartoon-like portraits of prime ministers, bewigged judges and viceroys. Along the gleaming white, hushed corridors, the walls are hung with Aboriginal art: one painting after another as in a monolithic gallery, divorced from their origins, the irony brutal. The poorest, sickest, most incarcerated people on earth provide a façade for those who oversee the theft of their land and its plunder.

Australia has 40% of the world’s uranium, all of it on indigenous land. Prime Minister Julia Gillard has just been to India to sell uranium to a government that refuses to sign the Nuclear Non Proliferation Treaty (NPT) and whose enemy, Pakistan, is also a non-signatory. The threat of nuclear war between them is constant. Uranium is an essential ingredient of nuclear weapons. Gillard’s deal in Delhi formally ends the Australian Labor Party’s long-standing policy of denying uranium to countries that reject the NPT’s obligation “to pursue negotiations in good faith on effective measures relating to cessation of the nuclear arms race at an early date and to nuclear disarmament”.

Like the people of Japan, Australian Aborigines have experienced the horror of nuclear weapons. During the 1950s, the British government tested atomic bombs at Maralinga in South Australia. The Aboriginal population was not consulted and received scant or no warning, and still suffer the effects. Yami Lester was a boy when he saw the nuclear flash and subsequently went blind. The enduring struggle of Aboriginal people for recognition as human beings has been a fight not only for their land but for what lies beneath it. Since they were granted a status higher than that of sheep — up to 1971, unlike the sheep, they were not counted – many of their modest land rights have been subverted or diminished by governments in Canberra.

In 2007, prime minister John Howard used the army to launch an “emergency intervention” in Aboriginal communities in the resource-rich Northern Territory. Lurid and fraudulent stories of paedophile rings were the cover; indigenous people were told they would not receive basic services if they did not surrender the leasehold of their land. Gillard’s minister of indigenous affairs has since given this the Orwellian title of “Stronger Futures”.

The tactics include driving people into “hub towns” and denying decent housing to those forced to live up to a dozen in one room. The removal of Aboriginal children has reached the level of the infamous “Stolen Generation” of the last century. Many may never see their families again.

Once the “intervention” had got under way, hundreds of licences were granted to companies exploring for minerals, including uranium. Contemporary politics in Australia is often defined by the power of the mining companies. When the previous Labor prime minister, Kevin Rudd, proposed a tax on record mining profits, he was deposed by a backroom party cabal, including Gillard, who reduced the tax. Diplomatic cables obtained by WikiLeaks reveal that two of the plotters against Rudd were informants of the US embassy, which Rudd had angered by not following to the letter US plans to encircle China and to release uranium for sale to US clients such as India.

Gillard has since returned Australia to its historic relationship with Washington, similar to that of an east European satellite of the Soviet Union. The day before Barack Obama arrived in Canberra last year to declare China the new enemy of the “free world”, Gillard announced the end of her party’s ban on uranium sales.

Washington’s other post-cold war obsessions demand the services of Australia. These include the intimidation of Iran and destruction of that country’s independence, the undermining of the NPT and prevention of nuclear-free zones that threaten the nuclear-armed dominance of the US and Israel. Unlike Iran, a founding signatory of the NPT and supporter of a nuclear-free zone Middle East, the US and Israel ban independent inspections. And both are currently threatening to attack Iran which, as the combined agencies of US intelligence confirmed, has no nuclear weapons.

The necessary inversion of reality and double standard require a “carefully orchestrated process”, the US embassy is assured by an Australian official quoted by WikiLeaks. According to the US cables, there are enthusiastic “Australian ideas” for “dredging up” information to help discredit Mohamad El Baradei who, as director of the International Atomic Energy Agency from 1997 to 2009, repeatedly refuted US claims that Iran was building a nuclear weapon. The Director of the Australian Arms Control office is portrayed as a US watchdog, warning against “a slippery slope” of governments “exercising independent judgment” on nuclear matters. A senior Australian official, one Patrick Suckling, is reporting as telling the US that “Australia wants the most robust, intrusive and debilitating sanctions possible” against Iran. Suckling’s victims are today mostly ordinary men, women and children.

On 5 October, the Australian Nuclear Free Alliance, which includes Aboriginal groups from across the country, gathered in Alice Springs. They called for a moratorium on all uranium mining and sales. Indigenous women made a special plea to Gillard, recently ordained by the white media as a feminist hero. No response was expected.

On 17 October, all the testaments of obedience and servility to the mighty patron finally paid off when Australia was rewarded with a non-permanent seat on the UN Security Council, known in Canberra as “the top table”. The timing is striking. An attack by Nato on Syria or Iran, or both, has never been closer. A world war beckons as 50 years are marked since “the world stood still”, wrote the historian Sheldon Stern. This was the 1962 Cuba missile crisis when the US and the Soviet Union came within an ace of nuclear war. Declassified files disclose that President John F. Kennedy authorised “NATO aircraft with Turkish pilots … to take off for Moscow and drop a bomb.”

The echo today could not be clearer